Together with Felix Girke, I have just published another op-ed piece on the genocide case currently pending at the International Court of Justice (ICJ) in The Hague. There, The Republic of The Gambia has filed a case against Myanmar, accusing the country’s army of having committed genocide of Muslim Rohingya. We have published on this issue also at OpenDemocracy, focusing on the figure of Aung San Suu Kyi herself, who has decided to act as the “Agent” of a high-profile team of lawyers. While her status as an ‘icon of democracy’ is unbroken within the country, especially in Western countries, commentators are grappeling with what they perceive to be a sudden and unexpected shift in her personality since she became “state counsellor”. However, as I have argued in 2017 already, this is in line with how she has always been doing politics. 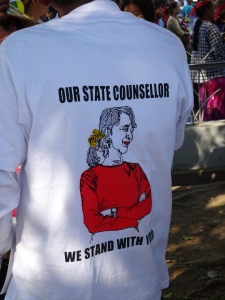 In our blog post for Public Anthropologist, we take a look at Aung San Suu Kyi’s speech at the ICJ on December 11 2019. We argue  that she employs “harmony ideology,” a concept coined by the legal anthropologist Laura Nader in the 1990s, based on her work among the Talean Zapotec in southern Mexico in the 1960s. Later, Nader applied her new terminology to so-called alternative dispute resolution (ADR)-cases in the United States of America.

“Harmony ideology”, so Nader, needs to be understood as a counterhegemonic force with which her Zapotec villagers tried to keep the Mexican state at bay. By pretending that they are a harmonious people and capable of dealing with their disputes internally, they tried to fend off any outside interference. In ADR-cases, Nader showed how “harmony ideology” was used to “outsource” dispute cases that judges thought to be too irrelevant for to be decided in state courts. In the case of Myanmar at the ICJ, however, Felix Girke and I argue that

Aung San Suu Kyi acted as if her country were a southern Mexican village, needing protection from illegitimate legal governance that interfered with its internal affairs, while at the same time embodying the very state apparatus that is now internationally accused of having committed genocide against its own population.

While the Talean Zapotec might have had effective measures for local dispute resolution and good reasons to keep the state courts at bay, the atrocities committed against the Rohingya and the poor record of Myanmar to police itself suggest that Suu Kyi’s harmony ideology at the ICJ is sorely misplaced, we argue. Read the full post over at Public Anthropologist.