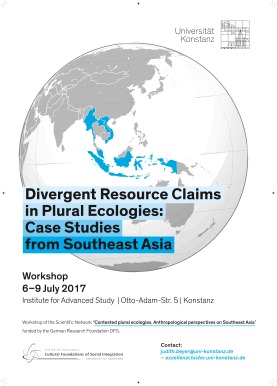 In this workshop, we intend to investigate divergent claims to resource access, thereby furthering our common interest in plural ecologies across Southeast Asia. Following Ribot and Peluso’s Theory of Access (2003), we define access to resources as the “ability to derive benefits from things – including material objects, persons, institutions, and symbols” (2003:153). Access to natural resources (such as land, water, mineral resources) is always legitimized, negotiated, defended, and denied through the recourse to cultural resources.

Cultural resources include economic (markets, infrastructure, etc.), political (legitimation discourses about civil rights, ethnicity, indigeneity cultural heritage, etc.), and religious (traditional knowledge, cosmology, etc.) forms of power and influence. In social-political practice, natural and cultural resources never appear separately but are always intertwined, and, to a certain extent, interdependent. Competition for and claims to resources is decisive since privileged access and the inclusion of a particular group usually involves the exclusion or neglect of others (see Hall, Hirsch, & Li 2011: 8, 13; Adhuri 2009).

We here consider the concepts of majority, minority, and indigeneity as political constructs functioning at the interface of local identity claims, traditional resource demands, the enforcement of national laws, and internationally promoted human rights. The “right to culture” is central in the recent development of collective human rights (see, for example, Francioni & Scheinin, 2008; Stamatopoulou, 2007) and the United Nations Declaration on the Rights of Indigenous Peoples (United Nations, 2007). Among others, it concerns the granting of long denied access to resources and promotes the advancement of group-specific rights on a national level, which is fostered by an increasing number of decentralization and demo- cratization processes in Southeast Asia and does not go undisputed as it leads to the exclusion of non-group members (compare e.g., F. v. Benda-Beckmann & K. von Benda-Beckmann, 2010; Kymlicka & Norman, 2000; Rosaldo, 2003; Taylor, 1994; Young, 1989). In debates on minority and indigeneity the question is whether it is justified to grant specific rights to individuals or groups within a state for historic reasons (see, in particular, Barnard, 2006; Bohnet & Höher, 2004; Guenther et al, 2003; Preece, 2005). Again, this implies a close interlinkage of political, cultural and natural resources.

What is of special interest for this workshop is how such ambivalences and contestations between local, national and international rights and claims inform ecological policies and power struggles at the respective levels. Given the rising demand for cultural rights and the plurality of ecologies within and across countries in Southeast Asia, a regional comparison would shed
new light on debates about diverging normative orders, the translation of individual and collective human rights, and the (sustainable) management of a broad range of resources.

For a full programme of the workshop see here.