Next to a BA-level course on Indigeneity and Law, I will be teaching in our Master’s Program “Anthropology and Sociology” a thematic course on anthropology and existentialism. After having spent a couple of months in France (Paris, in particular) this year and last year, living in direct vicinity to Sartre’s and De Beauvoir’s former “writing ground” (Café Le Flore, Café Les Deux Magots) in St. Germain, I became more and more interested in combining anthropological reasoning with existential philosophy. Next to Sartre, De Beauvoir and other French intellectuals of the mid-20th century, I encountered the work of Albert Piette (who teaches at Uni Nanterre in Paris) whom I only knew as Michael Jackson’s “sidekick” from “What is existential anthropology?” (Berghahn 2015).

I slowly read through his oeuvre, most of it only available in French, but some of it already translated into English by now. His creative way of approaching an anthropo-centric anthropology via what he calls ‘phenomenography’ is as innovative as it is radical. He argues against ethnomethodology, against social interactionism and against every other theory that privileges collectivity rather than individuality.

Since the best way to truly understand theory is to teach it, I am looking forward to my seminar where the question “What role does the individual actually play in anthropology?” will stand at the center of our inquiry. We will see that this question needs to be answered differently depending on what decade and what anthropological tradition we are talking about. We will be reading classical  anthropological literature (Malinowski, Benedict, Geertz, Obeyesekere, Rosaldo, Rapport, Lutz and Abu-Lughod) in order to understand how often the individual rather stood in anthropology’s way on the path towards ‘society’, ‘structure’ or ‘systems of meaning’. We will counter these views not only with recent existential anthropological literature, but also with literature from neighbouring disciplines such as philosophy (the old French classics) and existential psychoanalysis (Chodorow, Yalom).

Last but not least I hope to generate  insights into the nature of the relationships we develop with our key interlocutors during field research: Does a stronger focus on the individual’s existence require a change in the way we approach our ‘field’ and collect our ‘data’? How do we reflect on our own role as individuals in the field?

Here is the syllabus to the seminar: 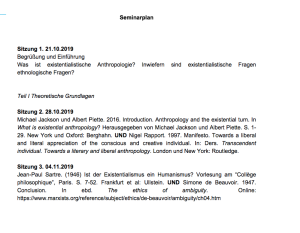 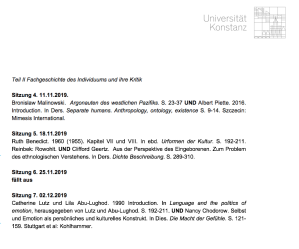 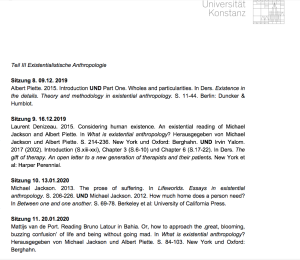