For Allegra Lab, I curated a thematic thread on the topic of Statelessness, Displacement and Disappearance. Together with Catherine Allerton, Alice Wilson and Siri Lamoureaux we explore these categories in a total of four blog posts with a focus on who can claim justice on whose behalf and in regard to the various ways in which uncertainty and accountability are being processed.

This thematic thread evolved out of a workshop on Claiming justice after conflict. The stateless, the displaced and the disappeared at the margins of the state, co-organized by Yazid Ben-Hounet (Paris) and myself. The presenters consisted of anthropologists and sociologists and convened for a full day on March 15, 2019, at the École des Hautes Études en Sciences Sociales (EHESS) in Paris.

In my introduction to this week-long thematic thread, I show in what ways statelessness, displacement and disappearance have become familiar and inescapable features of contemporary politics worldwide. The question of who can claim justice on whose behalf is first of all a question of representation, but also touches on scale, resources and access.

In the first post, Catherine Allerton engages with statelessness and the problem of the invisibility of migrant children and their families in Sabah, Malaysia. Their stories are about vulnerability as much as they are about resilience. Employing the concept of “documentary pragmatism,” Allerton explains that for her interlocutors, the goal is “being safe” rather than being documented. 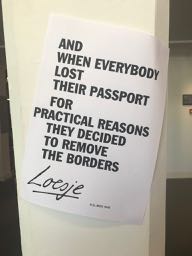 If people cannot make claims vis-à-vis the state at all, we pondered the question of what they might be doing instead. One option that Alice Wilson explores in her post is a shift in the very discussions people are having about disappearance: in her case in the context of Oman’s southern Dhufar region. She argues that the possibilities for claims-making, and its potential success, vary within different political environments.

Finally, Siri Lamoureaux explores in her post on displaced Nuba women in Sudan women’s options such as public shaming and the accusation of perpetrators by the so-called “Nubian Queens.” In light of the recent events her post bears particular urgency. Drawing on long-term fieldwork, she then asks “Where are the Nuba queens”, namely those women who “due to (pre/post)colonial histories of divide and rule, and unequal centre-periphery socioeconomic relations, have never donned a white towb?” that has become so emblamatic of the ongoing protests.  “Without denying the sacrifice and suffering of elite women in the protests, displaced women have suffered immeasurably from the Sudanese government’s policies”, she argues.

You can find all posts of this thematic thread here.